Review: How to Run with a Naked Werewolf by Molly Harper 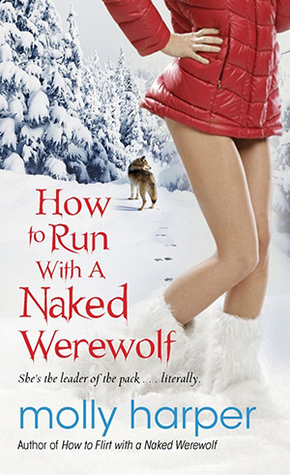 Anna Moder has just witnessed a shooting, seen her car pulverized, and rescued a wounded stranger only to discover he's really a werewolf. And by her recent standards, things are actually looking up. Lycanthropes don't faze Anna. Doctoring a wolf pack outside Grundy, Alaska, is the closest thing to home life she's known in years. But hitching a ride to Anchorage with long-absent pack member Caleb Graham - that's a risk. Part of her itches to whack his nose with a newspaper. The rest is trying unsuccessfully to keep her paws off every delicious inch of him.

The problem is - Caleb employs his lupine tracking abilities as a not-quite-legal bounty hunter, and Anna is suspicious of both him and his profession. On the run from her past, with old problems closing in, she'd like to stay far, far away from anybody with connections to the law. Caleb, however, seems determined to keep her close. Are his intentions noble, or is he working a more predatory angle?

Anna's been dreaming of returning to a semi-normal life, but now she's experiencing a strange new urge . . . to join Caleb in running with the wolves.

REVIEW
I remember loving this series when I started it many moons ago, but for some reason I had a hard time getting back into it. It's probably because there are several werewolf series set in Alaska. Anyway, it was difficult to remember who these characters were. Maybe they weren't mentioned much in the previous books, and that's why I'm drawing a blank? Someone leave me a note in the comments if you know!

Don't get me wrong - this is still a good story. But if you're looking for a hot-and-heavy romance or some serious werewolf action, you're in the wrong place. The main focus of the book is on Anna's problems and, later, the burgeoning relationship between Anna and Caleb.

I have a tough time reading about abused characters, which is likely another reason why I didn't love this latest installment as much as the previous two. Molly Harper has such a lighthearted writing tone that it was off-putting to read such a serious story written in such a cutesy voice.

THE BOTTOM LINE B Liked it and will read more in the series, but probably won't re-read it
POSTED AT 18:15