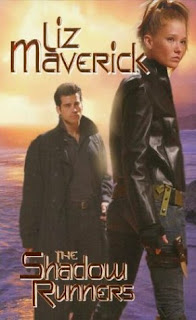 
Newgate, Australia: Down Under, anything goes.


In the 22nd century, history repeats itself. Part penal colony, part dumping ground for toxic waste, the land is controlled by "the Parliament," a gang of dissipated self-styled aristocrats who rule in a mockery of the English Regency. To survive here, you have to know the tricks. Like Jenny Red. She knows the score. She's been Down and made it out to tell the tale.


But D'ekkar Han Valoren - the bastard son of the Emperor whom Jenny's family was accused of destroying - knows Jenny escaped, and he wants her to take him back in. Okay, maybe she'll help Deck's team of rebels, his Shadow Runners, like he asks. But not because he's holding anything over her - if he tried anything that stupid, she'd give him a taste of steel. No, she'll do it because of what was once between them. Because of the revolution of her heart.

After struggling to get through book #2 in this series, I was so happy to see this book get off to a good start. I really liked the characters - both Jenny and Deck - and it certainly didn't hurt that it was set in Australia, which I love to read about!


Of course, Australia in 2176 is pretty messed up. Aristocracy around the world have fled to Australia and formed their own strange, 1700's-like court. And this court wants Deck. All the while, Deck and Jenny are fighting for freedom, heading into the Australian outback to create an outpost for the Voice of Freedom. (This is what ties all of the series together.)


I loved the romance and the world-building in this installment. Hang on to your hats, because it is one crazy ride!
POSTED AT 08:00