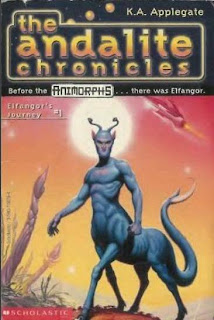 An Andalite war-prince. The one who gave five young humans the ability to morph into any animal they touch. They are still out there, fighting an evil so powerful there isn't a moment that goes by when they can actually feel safe. Their story continues.

But this is how it all began.

I decided to read the Animorphs series chronologically rather than in publication order. It's cool, I can do that - I'm a nerd. Haha. Anyway . . .

For those of you familiar with Animorphs, the first official book in the series opens with an alien crashing into Earth. Elfagnor's Journey, the first book in The Andalite Chronicles, chronicles that alien's life before that fateful day. It was very interesting to see this side of Elfagnor rather than the dying, serious alien I remembered. While not exactly humorous, I enjoyed seeing alien civilization through the eyes of a different alien rather than a human.

Quick summary: Elfagnor is a lowly aristh (cadet) onboard a spaceship, essentially still in training. Out of the blue, he is called to action as a pilot when enemy Skrit Na ship is spotted leaving Earth. When a second enemy ship is spotted, Elfagnor and his partner must take the lead themselves and take the ship, and in the process they rescue two human captives. Will Elfagnor be able to return the humans to Earth, or will another mission get in the way . . ?
POSTED AT 08:00