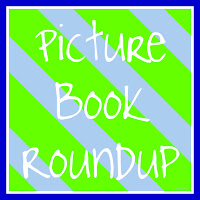 Here are the titles I've read in the last week (with links to GR).

The Return of Freddy LeGrand by Jon Agee
transportation
Freddy's plane crashes, he's saved by farmers, he builds a new plane, he crashes again, and he's saved by the farmers in his first plane. Blah.


To the Island by Charlotte Agell
vacation, rhyming, animal narrators
The pictures were dull, and there is so little text that it's like an early reader book for beginning picture book readers. Not recommended.

Dancing Feet by Charlotte Agell
multicultural, acceptance
This book had the same issues as the Agell book listed above. Not recommended.

Don't Call Me Pruneface! by Janet Reed Ahearn
friendship, new neighbors
This was cute! Paul gets a new neighbor and just can't make himself like her, but his grandma makes him wait a week to decide how he feels about her. A lot can change in just one week! Cute book!

A Bit More Bert by Allan Ahlberg
pets, dogs, parents
For an FSG book, this was surprisingly simplistic. Didn't love it.

The Pencil by Allan Ahlberg
art
So cute! This little pencil keeps creating its own little world . . . until he draws an eraser. Uh oh!

Previously by Allan Ahlberg
fairy tales (in reverse!)
I loved this book! It tells the fairy tales in reverse! It starts with the various characters' happily ever afters and tells how they got to that point . . . previously. So fricking cute.

The Runaway Dinner by Allan Ahlberg
mealtime
I had high hopes for this book, but it didn't quite add up. Kids will probably like it; however, it was a little too gimmicky for my tastes.

The Shopping Expedition by Allan Ahlberg
adventure, parents, pets, dogs
This was a cute, cute book! Kids will like it more than adults will, especially after 50 rereads, but I liked the exaggeration aspect of the story. Recommended.

The Snail House by Allan Ahlberg
grandparents, fantasy
Not as cute as I'd hoped, although I didn't have high hopes for the illustrations from the get go.
POSTED AT 14:00