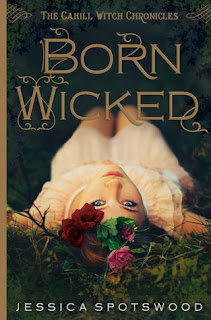 Everybody knows Cate Cahill and her sisters are eccentric. Too pretty, too reclusive, and far too educated for their own good. But the truth is even worse: they're witches. And if their secret is discovered by the priests of the Brotherhood, it would mean an asylum, a prison ship - or an early grave.

Before her mother died, Cate promised to protect her sisters. But with only six months left to choose between marriage and the Sisterhood, she might not be able to keep her word . . . especially after she finds her mother's diary, uncovering a secret that could spell her family's destruction. Desperate to find alternatives to their fate, Cate starts scouring banned books and questioning rebellious new friends, all while juggling tea parties, shocking marriage proposals, and a forbidden romance with the completely unsuitable Finn Belastra.

If what her mother wrote is true, the Cahill girls aren't safe. Not from the Brotherhood, the Sisterhood - not even from each other.

I was very pleasantly surprised by this book! I went in expecting a Victorian read that I wouldn't be able to handle (because I really hate that time frame), but instead I received an alternate history that made the story so much more interesting than I had originally anticipated!

The beginning is a little slow and reads like a typical historical fiction book, but I promise you that it picks up pretty quickly! This is a fantastic book about witches, prophecies, an overbearing, male-dominated society, and how Cate is trying to get her sisters and herself out of it alive. Much like Libba Bray's Gemma Doyle books, Born Wicked has a strong female heroine. Cate isn't afraid to make sacrifices for the people she loves, even at her own expense.

I can't wait to get book #2 to more fully explore the backstory and figure out how Cate is going to deal with everything that went down at the end of book #1!!
POSTED AT 08:00