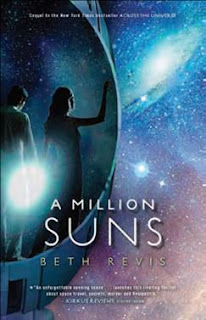 GODSPEED WAS FUELED BY LIES. NOW IT IS RULED BY CHAOS.

It's been three months since Elder unplugged Amy. The life she always knew is over. And everywhere she looks, she sees the walls of the spaceship Godspeed. But there may just be hope: Elder has assumed leadership of the ship. He's finally free to enact his vision - no more Phydus, no more lies.

But when Elder learns shocking news about the ship, he and Amy race to discover the truth behind life on Godspeed. They must work together to unlock a puzzle that was set in motion hundreds of years earlier, unable to fight the romance that's growing between them and the chaos that threatens to tear them apart.

Beth Revis mesmerizes us again with a brilliantly crafted mystery filled with action, suspense, romance, and deep philosophical questions. And this time it all builds to one mind-bending conclusion: They have to get off this ship.

"Amy, you're going to have to make a choice. This ship is dying. Godspeed won't last much longer. And you - you must decide for everyone. Because you're running out of time."

(This review will be spoiler free for A Million Suns.)

Holy frex! I skipped both sleep and a homework assignment in order to read this book - it was just that good!

I'm always concerned about second-in-a-trilogy books, because they tend to falter in style or only set up the story for the third book. A Million Suns, however, does not fall into any of the usual traps. The plot actually moves, the characters actually develop, and relationships move in a positive direction.

Revis said that she had included a scientific error in Across the Universe. As I do not particularly care for science, I couldn't figure it out before hand. However, everything becomes very clear in A Million Suns, and I was so excited to finally figure out the mystery and see some hope for the future in this series.