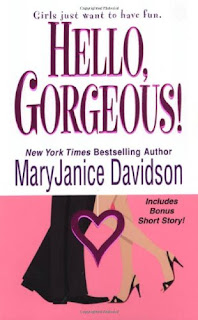 THEY WANT HER TO SAVE THE WORLD. AS IF.

One minute I'm out with my sorority sisters; the next there's a terrible accident (beyond my friend Stacey's outfit) and I'm waking up in some weird clinic transformed into a human cyborg - with a mission: to stop evil and stuff. Uh, hello? I've got a beauty salon to run.

Granted, it is cool to run faster than a Ford Mustang when I need to, even if it's totally hard on my shoes. But then I have to bring in another human cyborg on the run? One who happens to be male, totally gorgeous, smart, funny - and, um, his "enhancements"? - as if!

A quick summary that should be read with one breath: Caitlyn dies and is turned into a cybernetic being without her consent and just like The Bionic Woman she doesn't want to work for the government except she does and she has to take out another cybernetic being because he's killing people except he thinks she's the killer and there's a TWIST and somehow they fall in love happily ever after and the climax is rather anticlimactic. The End.


This was a cute story, and very typical of MaryJanice Davidson, and I finished it pretty quickly. However, if the book had been any longer, I would have been totally burned out by the end. Caitlyn has attitude just like Betsy and Fred do in the vampire and mermaid series, but it just doesn't feel the same. By the end of Hello, Gorgeous!, I was pretty much ready to strangle her.


Personally, I prefer my romance to have a little less anonymous sex that magically turns into full-blown soulmate love and more . . . oh, I don't know . . . actually getting to know each other? It bothered me that not one but two romances started out with mostly anonymous sex.


Sidenote: My version of Hello, Gorgeous!, which has the above cover, actually has more pages than I listed in the notes, but the last 80 or so are an unrelated short story ("Ten Little Idiots," also found in the  Wicked Women Whodunit anthology) and an excerpt from a future book (Doing It Right). It really felt like the short story, at least, was just there to pad the book because it would have been too short otherwise.
POSTED AT 08:00