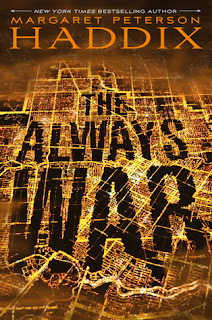 For as long as Tessa can remember, her country has been at war. When local golden boy Gideon Thrall is awarded a medal for courage, it's a rare bright spot for everyone in Tessa's town - until Gideon refuses the award, claims he was a coward, and runs away. Tessa is bewildered, and can't help but follow Gideon to find out the truth. But Tessa is in for more than she bargained for. Before she knows it, she has stowed away on a rogue airplane headed tor enemy territory. But all that pales when she discovers a shocking truth that rocks the foundation of everything she's ever believed - a truth that could change the world. Is Tessa brave enough to bring it into the light?

Amazon always releases books at funny times, so this one actually showed up on my doorstep last night even though it was released today. I had been looking forward to it for a while, so I managed to finish both this and the other book I had been reading last night before falling asleep at 9:30! (I know it's lame, but I was tired!)

The Always War did not at all live up to my expectations. As a fan of Margaret Peterson Haddix's Shadow Children series, I expected her world building to be much better. I was also incredibly unimpressed with all of the characters, finding them all flat, boring, and unrelatable - except sometimes Dek. This book felt thrown together and as though the world, plot, and characters had not been thought through.

Younger readers - pre-teens who haven't yet read a lot of quality YA books - may enjoy this book for its fast plotting and the "surprise" twist at the end. However, I would not recommend The Always War for anyone who has already had a taste of good dystopian books. Better options include Shatter Me by Tahereh Mafi (also released today!) and Under the Never Sky by Veronica Rossi (coming soon!).
POSTED AT 08:00