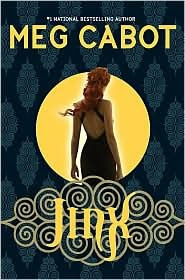 IT'S NOT EASY BEING JINX.

Jean Honeychurch hates her boring name (not Jean Marie, or Jeanette, just . . . Jean). What's worse? Her all-too-appropriate nickname, Jinx. Misfortune seems to follow her everywhere she goes - even to New York City, where Jinx has moved to get away from the huge mess she caused in her small homeworn. Her aunt and uncle welcome her to their Manhattan town house, but her beautiful cousin Tory isn't so thrilled . . .

In fact, Tory is hiding a dangerous secret - one that could put them all in danger. Soon Jinx realizes it isn't just bad luck she's been running from . . . and that the curse she has lived under since the day she was born may be the only thing that can save her life.

I should preface this by noting that I love Meg Cabot - her Mediator series was amazing!

Jinx, however, was an odd book, and I'm still not 100% sure what happened. It certainly felt like nothing happened . . . and I'm really not sure that anything actually changed by the end of the book. There is a witchcraft aspect to the story that might or might not actually be real. It feels more like a way to move the story forward, or maybe to add a little sexiness and a sense of the forbidden, rather than an actual part of the story.

And we can't forget Jinx. Poor, poor Jinx. Her life would be so much easier if she would just stick up for herself - even if it was only enough that she would stop being a doormat for the entire world. I could not relate to her at all.


This story is a letdown. I would recommend skipping it.
POSTED AT 09:00