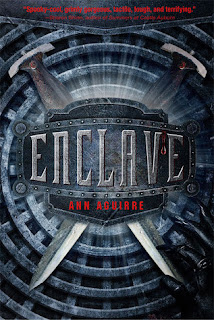 In Deuce's world, an enclave deep underground, people earn the right to a name only if they survive their first fifteen years. By that point, each unnamed "brat" has trained to join one of three groups - Breeders, Builders, or Hunters, identifiable by the number of scars they bear on their arms. Deuce has wanted to be a Huntress for as long as she can remember.

As a Huntress, her purpose is clear - to brave the dangerous tunnels outside the enclave and bring back meat to feed the group while evading the ferocious monsters known as Freaks. She's worked toward this goal her whole life, and nothing's going to stop her, not even a brooding hunter named Fade. When the mysterious boy becomes her partner, Deuce's troubles are just beginning.

Fade doesn't like following orders. Deuce has never known a boy like him before, someone as likely to touch her gently as use his knives with feral grace.

As Deuce's perception shifts, so does the balance in the battle for survival. The mindless Freaks, once considered a threat due to their sheer numbers, now show signs of cunning and even strategy . . . but the elders refuse to heed any warnings. No matter how hard she tries, Deuce cannot stem the dark tide that carries her far from the only world she's ever known.

Enclave is a little tough to get into in the beginning, mostly because, as a reader, I knew that Deuce's perception of the world was skewed, but she has no clue just how wrong her world view is. Once the story moved forward enough that she had begun to question her surroundings, I really got into it.


This book has all of the elements of a great zombie book without all of the unnecessary grossness and horror that I hate so much about zombie movies (and every book by Mark Henry). There are hidden societies, secrets and lies, gangs, and danger lurking around every corner. Seriously, it's awesome. I'm having a tough time putting it into words, because I can't put my finger on why I like it so much. I don't even particularly relate to Deuce, which is usually the clincher. It's just a great story, and I can't wait to read more!
POSTED AT 09:00

Email ThisBlogThis!Share to TwitterShare to FacebookShare to Pinterest
TAGS: review