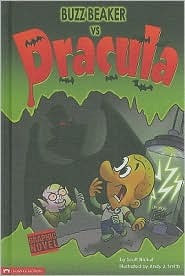 Dracula can live forever, but he really just wants to hit the beach! To catch some waves, the blood-sucking bat will need a little help. That's why he's captured the brainy Buzz Beaker. Now, this wacky whiz kid must turn the Lord of the Vampires into the King of the Beach, or he could be the monster's next meal.

This is a really cute book! It's my first Buzz Beaker, so I can't say if that applies to the whole series, but the sense of humor is very kid-friendly and the illustrations are not too scary. It's the perfect book for a kid who can't handle a lot of horror but still wants to read about it anyway (like me :] ). Dracula kidnaps Buzz Beaker because he needs a great scientist to figure out a way to let him sunbathe. A surprise twist at the end will keep readers on the edge of their seats!
POSTED AT 09:00