Wondering what's in the Special Edition of Lauren Oliver's Delirium? 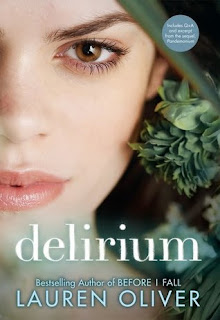 DELIRIUM: SPECIAL EDITION
(Delirium #1)
by Lauren Oliver
Publisher: HarperTeen
Source: Bookstore
Released: Today!
NINETY-FIVE DAYS, and then I'll be safe.
I wonder whether the procedure will hurt. I want to get it over with.
It's hard to be patient. It's hard not to be afraid while I'm still uncured, though so far the deliria hasn't touched me yet. Still, I worry.
They say that in the old days, love drove people to madness. The deadliest of all deadly things: It kills you both when you have it and when you don't.
So, what's up with the special edition?
First, if you haven't read this book yet, go pick up a copy. It's a little slow in the beginning, but the frenetic, emotionally-charged finale will leave you breathless.
This special edition is HarperTeen's way of allowing more anal retentive readers (like myself) to have matching copies of the books in this trilogy - the cover of the sequel, Pandemonium, has been redesigned to match the cover of this special edition. Personally, I think it's fabulous. I was not a fan of the cover that was published in February. Franly, I still prefer the original ARC cover, which you can see in my IMM post from January as well as an article about the change decision. This new one is definitely an improvement, though, and quite beautiful, even if it does belong in the Dude, Where's My Forehead? list on Goodreads.
This edition also has a six-page Q&A session with Lauren Oliver. I have no idea who was asking her the questions, but I assume it was someone associated with the publisher. It's a very interesting interview, covering topics such as how the idea came to her and some of the other elements of the book.
What die-hard fans will love most, though, is the 21-page teaser from Pandemonium. I will not be posting any of that here, but needless to say it is chock full of Oliver's beautiful writing.
POSTED AT 20:00