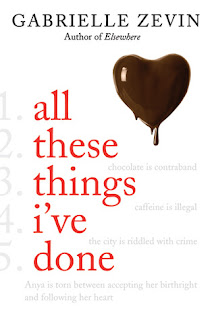 ALL THESE THINGS I'VE DONE
(Birthright #1)
by Gabrielle Zevin
Publisher: Farrar, Straus and Giroux
Source: Publisher (THANK YOU!!!)
To be released: September 6, 2011
In 2083, chocolate and caffeine are illegal, water is carefully rationed, books are scarce, and New York City is rife with poverty and crime.
And yet, for Anya Balanchine, the sixteen-year-old daughter of the city's most notorious (and dead) crime boss, life is fairly routine. But when she finds herself falling for the son of the new assistant district attorney, and her ex-boyfriend is poisoned by the chocolate her family manufactures, Anya is unwillingly thrust into the spotlight - in the news, and more important, within her mafiya family.
Gabrielle Zevin introduces readers to an unforgettable teenage heroine in a groundbreaking new series.


And my fall semester textbooks (except one backordered one)! I am such a nerd...