review: TOUCHED BY AN ALIEN by Gini Koch 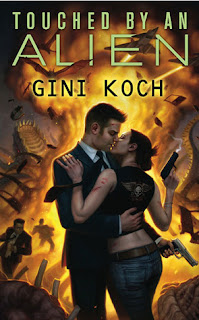 IT WAS JUST ANOTHER DAY IN ARIZONA - AND THEN THE MONSTER SHOWED UP . . .

Marketing manager Katherine "Kitty" Katt had just finished a day on juror duty. When she stepped out of the Pueblo Caliente courthouse, all she was thinking abotu was the work she had to get caught up on. Then her attention was caught by a fight between a couple - a domestic dispute that looked like it was about to turn ugly. But ugly didn't even begin to cover it when the "man" suddenly transformed into a huge, winged monster right out of a grade Z science fiction movie and wend on a deadly killing spree. In hindsight, Kitty realized she probably should have panicked and run screaming the way everyone around her was doing. Instead she got mad, searched her purse for a weapon, and, armed with a Mont Blanc pen, sprinted into action to take down the alien.

In the middle of all the screeching and the ensuing chaos, a tall handsome hunk of a guy in an Armani suit suddenly appeared beside her, examined the body, introduced himself as Jeff Martini with "the agency," called out to an Armani-clad colleague to perform crowd control, and then insisted on leading her to a nearby limo to talk to his "boss."

And that was how Kitty's new life among the aliens began . . .

I love sci-fi romance, but there just isn't a lot out there. I read all of the applicable Jayne Castle and Sherrilyn Kenyon titles, and after that I stalled out because I couldn't find anything new.

Then I found Gini Koch.

Koch's Kitty books are hilarious, fast-paced, and romantic without being cliched - in other words, the perfect trifecta. Kitty is pushy but has the brains to back up her actions and attitude, which is a nice change of pace. Martini is a strong but emotionally healthy guy who would drop everything if he felt a negative emotion from her, which is sweet. These characters are the complete opposite of everything I've become so frustrated with in recent years in the PNR and UF genres. They are such a breath of fresh air.

The other awesome part: I read somewhere that Daniel dos Santos, who created the Mercy Thompson series covers, also did the covers for this series. That's enough for me to fangirl right there because hey, the guy does amazing work!

If you can handle your hero and heroine fighting aliens instead of some other baddie like vampires or demons, give this series a shot. You won't regret it.
POSTED AT 08:00