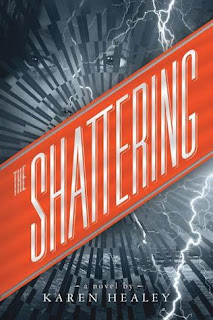 THE SHATTERING
by Karen Healey
Publisher: Little, Brown
Source: Blogger trade
Release date: September 5, 2011
"If you want to find out who murdered your brother, follow me."
Seventeen-year-old Keri likes to plan for every possibility. She knows what to do if she breaks an arm or gets caught in an earthquake or a fire. But she isn't prepared for her brother's suicide, and his death has left her shattered with grief. When her childhood friend Janna tells her that her death was a murder, not a suicide, Keri wants to believe her. After all, Janna's brother died under similar circumstances years ago, and she insists that a visiting tourist, Sione, who also lost a brother to apparent suicide, has helped her find some answers.
As the three dig deeper, disturbing facts begin to pile up: One boy is killed every year, all were older brothers, and all had spend New Year's eve in the idyllic town of Summerton. But when the teens' search for the serial killer takes an unexpected turn, suspicion is cast on those they trust the most.
As secrets shatter around them, can they save the next victim? Or will they become victims themselves?
Award-winning author Karen Healey (Guardian of the Dead) has created a story filled with suspense and horrror, spun with a unique magical twist, that will keep readers guessing until the final, thrilling pages.

Rebirth by Sophie Littlefield
Dark Souls by Paula Morris
Circle of Fire by Michelle Zink (The 1st book was SO GOOD!)

Displacement by Thalia Chaltas
The Big Crunch by Pete Hautman


I also have a slight, completely inexplicable obsession with kids' Halloween books . . . even when Halloween is still months away.


I start books as a reader's version of a nervous tick when I've got a big assignment (exam, whatever) coming up and am not quite sure how it's going to turn out. Strange, I know, but what can I say! Anyway, I turned in my paper late last night, so now that the hell is over these will all hopefully be finished next week.