review: THE COVE by Catherine Coulter 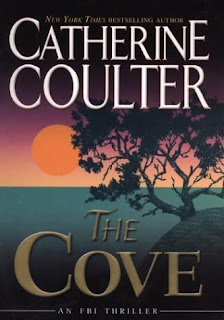 The Cove is a quaint little postcard town made up only of old folk who sell the World's Greatest Ice Cream - a secret recipe that brings lots of tourists into town.

Into The Cove comes Sally Brainerd, daughter of murdered Amory St. John of Washington, D.C., seeking sanctuary, and FBI Special Agent James Quinlan who's undercover and after her. He's got a murder to solve, and he believes she's the key. But is she really?

Are you ready to strap yourself in for nonstop tomantic suspense? I'm going to scare you; treat you to mysteries that will, hopefully, confound you; and have you smiling and nodding at an unlikely love story between two of the neatest people you'll ever meet.

Grab hold tight and come into a world where illusion becomes reality and truth is a disguise.

I first read this book many, many years ago, when I first started pilfering books from my mom's stash. (I was in sixth grade and ready for adult books, goshdarnit! ;] ) I loved everything Coulter wrote and continue to collect her books to this day. I have to admit that part of it is for the covers, though.

Check out this original cover of Chandra (later reissued as Warrior's Song)! Love!

That said, this was a tough book to reread. Some books are fantastic no matter when you read them or what life experience you have racked up since the last time you cracked the cover. The Cove, well . . . not so much.

Sally is a strong character in the sense that she overcomes her abusive background to rise above her situation and resolve the problems plaguing her life. However, this time around I just could not get over her stereotypical 90s heroine weaknesses. Additionally, some of the descriptions - especially the ones coming out of Quinlan's mouth - were absolutely cringe-worthy.

It was very disappointing to come back to this book and discover that I had essentially outgrown it in the last few years. I am reluctant to pick up any of her other books because I don't want to tarnish my treasured memories of them.

If you're looking for a good romantic suspense that doesn't have the typical 90s cliches about women, try picking up Iris Johansen's Eve Duncan series or Tami Hoag's mysteries like A Thin Dark Line instead.
POSTED AT 08:00