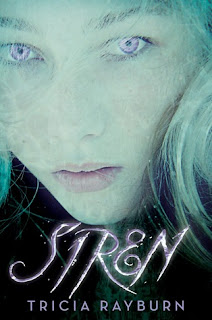 Vacationing in Winter Harbor, Maine, is a tradition for Vanessa and Justine Sands, and that means spending time with the Carmichael boys. This summer, Vanessa is determined to channel some of her older sister's boldness, get over her fear of the ocean, and maybe turn her friendship with Simon Carmichael into something much more.

But when Justine goes cliff-diving after a big family argument, and her body washes ashore the next day, Vanessa is sure that it was more than an accident. She is more certain of this, when she discovers that her sister was keeping some big secrets and Caleb Carmichael's gone missing. Suddenly, the entire oceanfront town is abuzz when a series of grim, water-related accidents occur, with the male victims washed ashore grinning from ear to ear.

Vanessa and Simon team up to figure out if these creepy deaths have anything to do with Justine and Caleb. But will what Vanessa discovers mean the end of her summer romance, or even life as she knows it?

For years, Vanessa and her older sister, Justine, have spent every summer with their parents up at the family beach house in Winter Haven, Maine. This year starts as every other year has in recent memory - with Justine and the two Carmichael boys cliff jumping, and Vanessa too chicken to join in. She's just too scared of the water, and she's happy to use the incoming storm as an excuse to back out of the jump. Later that night, though, after a big fight, Justine stomps out of the house and is found a few days later, drowned and washed up on the shore. Vanessa and her parents return home to Massachusetts for the funeral, but she can't stay. Everything, including the room she shared with her sister, holds too many memories, and she needs to get away for a while to cope. Some things about Justine's life just aren't adding up, though, and Vanessa soon finds herself drawn into the mystery of her sister's death . . .

I'm torn on this one. I loved the concept, the story, and the characters, especially Vanessa and Simon. However, the pacing was a little off for me, and I sometimes felt that I was missing something that Vanessa - the first-person narrator - knew. It was frustrating to be so drawn into a story yet be so confused at times about what was going on, because I didn't want to stop reading to go back and figure out. So that's what the mixed grade is about - B+ for pacing, but A- for the story itself. I will definitely be picking up the second book, though - it's not a cliffhanger, but I really want to know what happens next!

Siren is a highly original concept (at least IMHO), and I would recommend it to anyone who can withstand the siren's song! ;) Seriously, though, it's a good book. Just read it slowly.
POSTED AT 07:00