review: THE SKY IS EVERYWHERE by Jandy Nelson 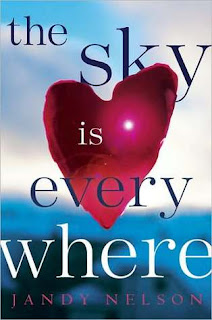 Seventeen-year-old Lennie Walker, bookworm and band geek, plays second clarinet and spends her time tucked safely and happily in the shadow of her fiery older sister, Bailey. But when Bailey dies abruptly, Lennie is catapulted to center stage of her own life—and, despite her nonexistent history with boys, suddenly finds herself struggling to balance two. Toby was Bailey's boyfriend; his grief mirrors Lennie's own. Joe is the new boy in town, a transplant from Paris whose nearly magical grin is matched only by his musical talent. For Lennie, they're the sun and the moon; one boy takes her out of her sorrow, the other comforts her in it. But just like their celestial counterparts, they can't collide without the whole wide world exploding.

My Thoughts
I was put off of reading this book for the longest time, because I was afraid that it would be too much for me to handle. But while it is certainly a sad book, Sky is also filled with hope and light. I had to put it down to eat dinner and kept tapping my foot the entire time, wanting to get back to it. I ended up staying up late to finish it and am so glad I did. It is wonderful to find an author that recognizes how some of us deal with our grief.

I was three years old when I lost my sister. She was just a baby, only about four months old. And, well, she wasn't really my sister - not yet, anyway. She died before her adoption was finalized. But regardless of legalities, I still consider her my sister, and, even though I had so little time with her, I miss that little girl with every fiber of my being.

Worst of all, though, was that since she died, my parents were moved back to the bottom of the list for adoptions, and they decided they were too old to wait another three to five years. I was an only child until about the time I turned eighteen and contacted my birthparents - but it will never be the same as growing up with my little sister. As much as I love my half-siblings, I am still reminded every time I see them of the gaping hole in my heart where my sister should be.

My parents never sheltered me from death, and for that I am grateful. That doesn't mean it's easy to deal with, though, especially when it strikes so often in my family and my community that I count the years by who died in them, rarely getting a year off (only one since middle school, and I'm 23). The natural causes are easier to deal with, most of the time. Except when my friend's little brother died of the same disease that took my sister. But it's the terrible reasons, like murder, that get to me the most.

Grief makes you do terrible, stupid things, things that people look down on you for doing. It makes you reach out to the wrong people for comfort. Half the time these things end up making you feel worse, but you keep doing them because it's better to find temporary peace than to feel empty on the inside.

This is why I understood Lennie.

This is why I am so glad I read this book.

Not everyone goes through the stages of grief in a neat, clean way. Real life is messy, and people make bad choices. I was so happy to see that the author understood this.