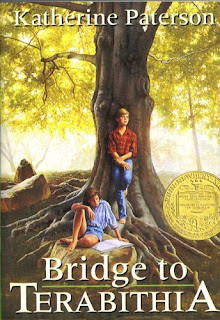 A secret world of their own

Jess Aaron's greatest ambition is to be the fastest runner in the fifth grade. He's been practicing all summer and can't wait to see his classmates' faces when he beats them all. But on the first day of school, a new kid, a new girl, boldly crosses over to the boy's side of the playground and outruns everyone.

That's not a very promising beginning for a friendship, but Jess and Leslie Burke become inseparable. It doesn't matter to Jess that leslie dresses funny, or that her family has a lot of money -- but no TV. Leslie has imagination. Together, she and Jess create Terabithia, a magical kingdom in the woods where the two of them reign as king and queen, and their imaginations set the only limits. Then one morning a terrible tragedy occurs. Only when Jess is able to come to grips with this tragedy does he finally understand the strength and courage Leslie has given him.

I read this book many years ago and watched the movie with my younger siblings a couple summers ago, enjoying both of them at the time. It was great to be able to go back to the book, though, as I found that I had missed being away from it for so long.

The death of a friend is a tough topic for kids, but I think the magical nature of Terabithia helps to make it easier for them to handle. All the kids I know who’ve read this book, or watched the movie, love it. Even my little brother, who hates everything vaguely emotional, loves it and begged me to watch it with him. I think having a male narrator who’s actually in touch with his emotions is what makes this such an accessible story.
POSTED AT 07:00