review: THE THIRD PLANET FROM ALTAIR by Edward Packard 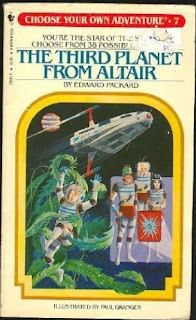 The reader, en route to the third planet from Altair to seek the source and meaning of extraterrestrial messages, is given choices to make determining the course of the spaceship and the survival of its crew.

My Thoughts
Choose Your Own Adventure books are such a great option for kids! There are titles that work for both boys and girls, as well as a few crossovers. I think the books are so popular because kids have so little control over their own lives that they are fascinated with the idea of controlling the stories they read. CYOA books are also published in just about every genre, so there’s a book for everyone.

With this book, I finally had the opportunity to do something I’ve always wanted to do with the CYOA books: map out all of the reading paths. (I’m kind of a dork like that.) There were 98 different ways to read this book! Considering there were only 38 separate endings, I thought it was pretty interesting that there were so many paths to get there.

Besides the many copycat CYOA series for kids, such as Give Yourself Goosebumps by R.L. Stine, adult publishers are also starting to get in on the genre with titles like Can YOU Survive the Zombie Apocalypse? by Max Brallier. It’s as though the kids who grew up reading the CYOA books are seeking something similar as adults. One can only hope that the kids who love today’s CYOA books will have the option to read adult-level CYOA books when they’re grown up, too.
POSTED AT 07:00