review: GODDESS OF THE SEA by P.C. Cast 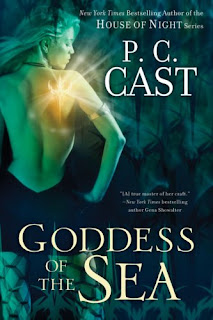 On the night of her twenty-fifth birthday, alone in her apartment, Air Force Sergeant Christine Canady wished for one thing: a little magic in her life. After drinking way too much champagne, she performed, of all crazy things, a goddess-summoning ritual, hoping that it would somehow make her life a little less ordinary...but she never believed the spell would actually work!

When her military plane crashes into the ocean, CC's mission overseas takes an unexpected turn. She awakens to find herself in a legendary time and place where magic rules the land—occupying the body of the mythic mermaid Undine. But there is danger in the waters and the goddess Gaea turns this modern, military gal into a beautiful damsel so that she can seek shelter on land.

CC is soon rescued (literally) by a knight in shining armor. She should he falling in love with this dream-come-true, but instead she aches for the sea and Dylan, the sexy merman who has stolen her heart.

On her twenty-fifth birthday, Air Force Sargeant Christine Canady wishes for magic in her life. She just doesn't expect it to happen in such a big way! When CC's plane crashes into the ocean, she somehow trades bodies with a mermaid and is transported back in time, where she us supposedly rescued by a handsome prince. Only, things aren't quite what they seem at the abbey, and CC is soon fighting for her life. The question is: can she save her life AND the magic that just entered her life, or will she have to choose?

This story was a little too out there for me - CC wishes for magic, is turned into a mermaid, and is transported back in time to an abbey somewhere in feudal Europe where a hot merman just happens  to fall in love with her and rescue her from the abbott's clutches? Not to mention the love scenes between CC and her merman, which left me alternately blushing and giggling. Oh, dear. It was an interesting mythology, though, and Cast certainly knows how to tell a story. I would recommend this book for anyone who is interested in an updated version of an old legend. (Or merman sex . . . just sayin'. :] )
POSTED AT 07:00