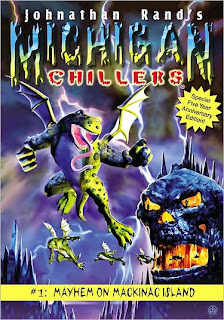 Trapped in a strange world!

Sandy and Tim Johnson spend every summer on Mackinac Island . . . but this year, something goes very wrong! After being swallowed by an old tree, they find themselves trapped in a strange world filled with weird creatures and a curious old miracle-maker. Their only hope is to find the mysterious Stone Key . . . the key that will return the Isle of Mayhem back into the Isle of Miracles, and open the door that will allow Sandy and Tim to return home.

But in a land filled with dangerous Wartwings and Blinkmongers and other scary creatures, how can they possibly succeed?

First of all: For those of you not familiar with Michigan, Mackinac is pronounced like "Mack-in-aw." Yes, I know it's weird.

I bought this book on a whim last year at Meijer, because I love books set in my home state, but kept putting off reading it because the cover just didn’t do anything for me. Since all of my siblings live out of state, I always seemed to find something else for them to read.

This was an interesting story. I really like the concept of alternate realities. The relationship between Sandy and her brother was also pretty cute. However, I did NOT enjoy the overabundance of exclamation points. By the second chapter, I was cringing every time one showed up on the page. The story was also overly simplistic for my tastes. My original estimation of the book turned out to be correct – it’s a cute book, but it’s definitely not to my liking.

Even though Mayhem is narrated by a girl, I think the subject matter makes it accessible to both girls and boys. It’s an adventure without anything really gross happening, so it appeals to a fairly wide audience. In fact, it’s probably easier to describe the type of child that wouldn’t like this book (little ballerina-type girls) – as opposed to those who would (everyone else).
POSTED AT 22:00