review: THE DEAD OF NIGHT by John Marsden 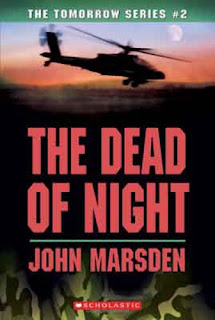 A few months after the first fighter jets landed in their own backyard, Ellie and her five terrified but defiant friends struggle to survive amid a baffling conflict. Their families are unreachable; the mountains are now their home.

When two of them fall behind enemy lines, Ellie knows what must happen next: a rescue mission. Homer, the strongest and most unpredictable among them, is the one to take charge. While others have their doubts about his abilities, Homer has no choice but to prove them wrong - or risk losing everything to the enemy.

It's funny how you can know something's going to happen next but still dread it so much that you spend all your energy wishing and hoping for a different outcome. I had to force myself to read certain parts of The Dead of Night because I knew what was coming but didn't want to read it all over again. It's going to be much worse with A Killing Frost, for sure.

Dead isn't my favorite of the series - that honor goes to #1 and #7, and possibly #5. I love this one because it's such a realistic portrayal of what starts to happen when you realize that you're going to be stuck with these people for who knows how long - until you win the war or get caught, basically. But it's tough to read the characters getting so cross with one another. Events halfway through and at the very end also make it a difficult re-read because, as I mentioned above, you know what's going to happen and can't do a damn thing to change it. Marsden is not afraid to put his characters through Hell (pun intended), and it adds a certain amount of honesty to the storyline.

I still love the book though - I'd just rate it an A instead of an A+.