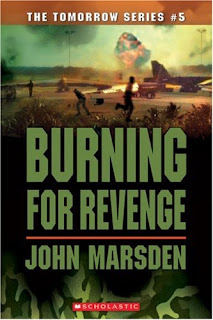 A BATTLE THEY DIDN'T CHOOSE.

The journey to Stratton isn't an easy trip, especially when the enemy's headquarters lie somewhere on the way. And that's exactly where Ellie and her friends unwittingly find themselves - right in the middle of a heavily fortified airfield. With only five of them against hundreds of armed soldiers, escape seems like a suicide mission. But Stratton is where Ellie's grandmother lives, so the journey must be made - even though the odds couldn't be worse.

I've never felt that the back cover description for this book quite does it justice. Ellie realizes that the chances of her grandmother still being in Stratton are slim to none. In fact, that part of the story, at least to me, was secondary to the bit at the airfield. That was a spectacular action sequence. And - there's that word again - it was an honest portrayal, especially Kevin's actions.
POSTED AT 07:00