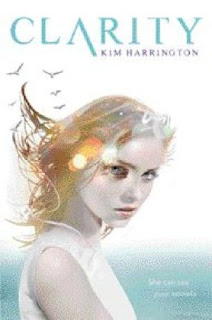 Clarity "Clare" Fern sees things. Things no one else can see. Things like stolen kisses and long-buried secrets. All she has to do is touch a certain object, and the vision comes to her. It's a gift.

When a teenage girl is found murdered, Clare's ex-boyfriend wants her to help solve the case - but Clare is still furious at the cheating jerk. Then Clare's brother, who has supernatural gifts of his own, becomes the prime suspect, and Clare can no longer look away. Teaming up with Gabriel, the smoldering son of the new detective, Clare must venture into the depths of fear, revenge, and lust in order to track the killer. But will her sight fail her just when she needs it most?

EXCEPT WHEN THE TRUTH IS TOO DARK TO BEAR.

Clarity is Veronica Mars meets The Profiler, with a generous heaping of awesomesauce on top. I did a little dance when it finally arrived on my doorstep (much to the chagrin of the mailman, I'm sure) and read it as soon as I finished up my current read. In the hour and change that it took to race through it, Clarity took me on a roller coaster ride of emotions, and I haven't quite recovered from it yet. (Should she choose Gabriel? Can she look beyond her past with Justin? I DON'T KNOW! Ahh!) All I know is that I really want to read it again right now!

Clarity is a fantastic read, and it's not too paranormal-y. (Blasphemous? Yes. But still true.) This is a great book if you need a break from hardcore paranormals - i.e. I just wrapped up a somewhat gross zombie story,  and Clarity was a perfect contrast. Anyway, I would argue that the main focus is on the investigation, and Clare's visions are a necessary side story to move along the plot. That said, I would also bet that the paranormal aspect will become more featured in book two, and maybe we'll meet some of the more mysterious figures in Clare's family tree.

So if you get anything out of this review, it should be this: Clarity is awesome. Go grab a copy, stat!!!