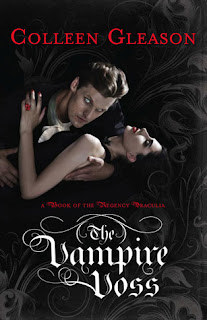 But the Woodmore sisters are hunted by a more sinister breed: Lucifer's own.

Voss, also known as Viscount Dewhurst, relishes the sensual pleasures immortality affords. A member the Dracule – a cabal of powerful, secretive noblemen marked with a talisman that reveals their bartered souls – the mercenary Voss has remained carefully neutral ... until Angelica.

Angelica Woodmore possess the Sight, an ability invaluable to both sides of a looming war among the Dracule. Her very scent envelops Voss in a scarlet fog of hunger – for her body and her blood. But he is utterly unprepared for the new desire that overcomes him – to protect her.

Now Voss must battle his very nature to be with Angelica ... but this vampire never backs down from a fight.

Colleen Gleason's writing shines once again! Gleason is one of the few authors who, at least in my humble opinion, successfully pulls off historical paranormal stories. (She also writes post-apocalyptic paranormals as Joss Ware - highly recommended!)

The Vampire Voss is the first in Gleason's new historical vampire series, Regency Draculia. It's set years before her Gardella Chronicles series, and the mythology seems to be a little different - although I will admit to not having finished the Gardella series (yet!). Her take on vampire mythology is fascinating - Lucifer, dreams, the Mark as a physical manifestation of their cracked souls, etc.

I'm also a big fan of redemption for vampires and other "baddies." Voss starts off as a real ass, but over the course of the book he learns to put others before himself.

Angelica was a great heroine, especially for a historical. She's not the typical helpless, useless female - she is both smart and able to protect herself. She is a lovely change of pace and the main reason that Gleason is one of the only historical authors I will read.