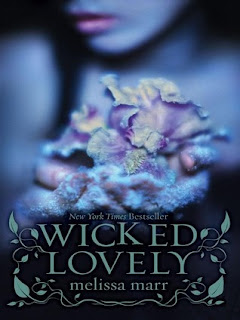 RULE #3: Don't stare at invisible faeries.
Aislinn has always seen faeries. Powerful and dangerous, they walk hidden in the mortal world. Aislinn fears their cruelty - especially if they learn of her Sight - and wishes she were as blind to their presence as other teens.

RULE #2: Don't speak to invisible faeries.
Now faeries are stalking her. One of them, Keenan, who is equal parts terrifying and alluring, is trying to talk to her, asking questions Aislinn is afraid to answer.

RULE #1: Don't ever attract their attention.
But it's too late. Keenan is the Summer King, who has sought his queen for nine centuries. Without her, summer itself will perish. He is determined that Aislinn will become the Summer Queen at any cost - regardless of her plans or desires.

Suddenly none of the rules that have kept Aislinn safe are working anymore, and everything is on the line: her freedom; her best friend, Seth; her life, everything.

I had been putting off reading Wicked Lovely for a long time, because I just don't seem to get into faery books. The only real exception to this rule is Anya Bast's Enchantment series, but that one's definitely for adults. Young adult faery books never seem to do anything for me.

Wicked Lovely, however, may have converted me - at least for this series. Melissa Marr has created a world in which the humans don't always have to bend completely to the faeries' will, and that makes it much more appealing. Aislinn is a strong character, and she is not willing to sacrifice herself, her love, and her plans for her future in order to "do the right thing" and save the Summer Court. She realizes that it's something that must be done, but she's not willing to lose herself in the process. That alone makes her a much better role model than a lot of the female protagonists out there in today's young adult paranormal literature.

I'm still not likely to jump into the faery subgenre with gusto, but Marr's series has piqued my interest. Once my backordered copy of Fragile Eternity arrives (what can I say, I'm a hardcover snob!), I plan on reading the rest of the series as soon as possible.

By the way, did anyone else know that Wicked Lovely is going to be a movie? Maybe I've been living under a rock (again), but that's pretty exciting!
POSTED AT 15:00