review: TO TAME A HIGHLAND WARRIOR by Karen Marie Moning 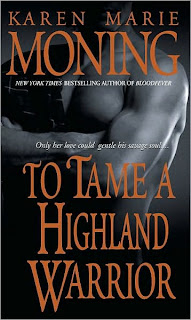 He was born to a clan of warriors of supernatural strength, but Gavrael McIllioch abandoned his name and his Highland castle, determined to escape the dark fate of his ancestors. Hiding his identity from the relentless rival clan that hunted him, he called himself Grimm to protect the people he cared for, vowing never to acknowledge his love for ravishing Jillian St. Clair. Yet even from afar he watched over her, and when her father sent an urgent summons, "Come for Jillian," he raced to her side - into a competition to win her hand in marriage.

Why had he run from her so many years before? And why return now to see her offered as a prize in her father's manipulative game? Furious, Jillian vowed never to wed. But Grimm was the man she loved, the one who urged her to marry another. He tried to pretend indifference as she tempted him, but he could not deny the fierce desires that compelled him to adbuct her from the altar. She was the only woman who could tame the beast that raged within him - even as deadly enemies plotted to destroy them both . . .

This was a cute follow-up to Moning's historical debut, Beyond the Highland Mist, and picks up with that main character's best friend, Gavrael, aka Grimm. Whew! This was one hot story. It took a little while to get started, as Grimm had decided to protect Jillian from himself by staying away from her or, when that proved impossible, acting like a general jackass toward her. But once Grimm, for lack of a better term, got over himself, the story heated up immensely!

For me, the best part of the book was Grimm's backstory. I loved reading about Grimm and Jillian together, and especially their banter, but Grimm/Gavrael's tragic childhood added a poignant touch - and just the right bit of paranormalcy - to an otherwise predictable story.

If you're looking for a great historical and/or highlander romance, this is the series for you! If you still need convincing, check back tomorrow for my review of the third book in the series, The Highlander's Touch.
POSTED AT 07:30