review: TALK NERDY TO ME by Vicki Lewis Thompson 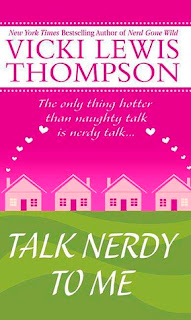 New York Times bestselling author Vicki Lewis Thompson returns with an irresistible new tale of egghead love starring a nerd in hottie’s clothing and the Harley-riding brainiac who gets her motor running . . .

Fashion model Eve Dupree is fed up with being labeled “the pretty one” while her sister’s called a genius. Eve’s got loads of brilliant ideas, not least of which is the invention she’s building in her garage. But when she turns to the nerd next door to help get it off the ground, she finds herself on dangerous ground.

Meets a hunky engineer with an agenda . . .

Charlie Shepherd has discovered that there’s more to Eve than meets the eye. But it’s not just her body he likes – it’s those sexy brains of hers. Romance is a complication he doesn’t need right now. The problem is, she has something he needs and he can’t seem to resist her.

Keeping her creation under wraps is harder than Eve expected – as is denying her attraction to Charlie. But when a saboteur starts sniffing around her project, she questions everyone around her, even her nerd in shining armor. Can opposites attract, or will they ignite a fire they can’t control?

This is my all-time favorite from this series! It was so refreshing to have the female protagonist be a nerd. Eve Dupree is a fashion model, and no one will allow her to step outside of that role. So she's turned into something of a garage inventor, and someday she plans on proving them all wrong. Charlie Shepherd meets Eve when something explodes in her garage as he's driving home from work. It's an apt beginning - their relationship is nothing short of explosive itself. I especially loved that Charlie was insightful enough to look beneath Eve's beautiful exterior to the incredibly intelligent, if a little spacey, woman that she truly is.

Eunice is another example of Thompson's incredible ability to create memorable secondary characters. She believes that she was abducted by aliens and taught various alien seduction techniques. She also supplements her income with phone sex.

The end result? Hilarity all around! Even if you skip all the other Nerd books, make sure you pick this one up!
POSTED AT 07:30