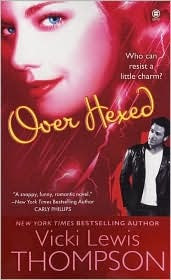 Banished. Until their unconventional techniques land them in hot water, Dorcas and Ambrose are the matchmaking sex therapists for lovelorn witches and wizards. The Grand High Wizard has exiled them to the very conventional and unmagical town of Big Knob, Indiana. Population: 947. But that doesn't mean they've given up on matchmaking.

Now they're doing it for mere mortal - although all agree: Sean Madigan is something of a god. Because he's tired of being the town sex object, Dorcas and Ambrose strip him of his appeal and then introduce him to his destiny, Maggie Grady. This time, winning a girl's heart won't be so easy for Sean. It means rediscovering the charms buried beneath the gorgeous surface and finally proving himself to be more of a man than ever before.

Sean Madigan needs a woman. No, scratch that - he's got women, but what he needs is a good woman he can settle down with, one who doesn't think he's only good for his looks and skill in bed, who will save him from the throngs of woman who are throwing themselves at his feet. Insert Dorcas and Ambrose Lowell. Exiled to Big Knob, Indiana, after a spell-gone-wrong affected a member of the Witches' Council, this unconventional couple knows they are sorely needed in this nonmagical town. They agree to help Sean - not that he believes them - by turning off his sex appeal. Unfortunately, the next day Sean meets the perfect woman... who has the least perfect job. If he can't charm Maggie into looking elsewhere for a property for her big box store, Sean could lose his childhood home. Can he win her heart without his good looks?

This was a cute book, and I loved the two main characters. The way their relationship developed, both magically and unmagically, was a joy to watch. Sean was really a fish out of water, as he'd never had to work to catch a woman's eye. Losing his sex appeal made him try harder than he ever had in the past, and I think that made it more worthwhile for him in the long run - he knew that Maggie loved him for who he truly was on the inside. All of the magical goings-on in this nonmagical town gave the story a little something extra. Dorcas and Ambrose, with their sex-starved ways, pack a punch on their own, but George and the Whispering Forest add quite a bit of levity. In short, highly recommended!

For more information on the Hex series, click here! Check back tomorrow for my review of the second book in the series, Wild & Hexy.
POSTED AT 16:00