review: NERDS LIKE IT HOT by Vicki Lewis Thompson 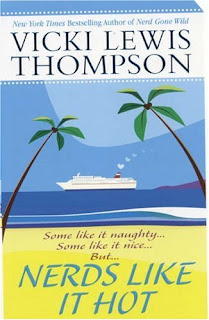 Hollywood makeup artist Gillian McCormick wouldn’t normally be caught dead on a cruise aimed at single geeks. But as the sole witness to a murder, hiding out may be her only chance at staying alive. With P.I. Lex Manchester guarding her, and a voluptuous disguise in place of her plain-Jane wardrobe, Gillian should be safe . . . if she can resist a titanic attraction to Lex that’s making her fantasize abound some extra-naughty cruise activities . . .

Lex thought he had left behind his nerdy ways, but his suave demeanor has no chance against Gillian’s bombshell image and the smart, sexy woman within. And when the scent of seduction wafts through the sea air, what’s a red-blooded male to do?

And the passion they’ve found is about to get out of control . . .

With a passenger list that includes a mobster on a mission, a cross-dressing sociopath, and hundreds of lusty nerds, Lex must find a way to keep Gillian safe – and prove that he’s truly her nerd for all seasons . . .

When Gillian McCormick, makeup artist to the stars, witnesses an actor with Mob connections murder another actor, she knows she needs to get the heck out of dodge. Gillian turns to her good friend and former actress Cora Bledsoe, who in turn calls in the big guns - P.I. partners Lex Manchester and Dante Fiorello - to help keep Gillian safe on a cruise for geeks until she can escape to South America. Lex knows he's in for trouble, though, because one glimpse of Gillian leaves him daydreaming of her voluptuous body. As the cruise progresses, though, it soon becomes clear that the Mob knows Gillian is onboard. Lex needs to stay close - very close - to Gillian to ensure her safety.

Thompson again creates a fantastic sociopathic villain. Neil Rucker, Mob-connected bad boy actor, and his alter-ego, Nancy Roth, are hilarious. It's hard to believe that a man could so convincingly hide out as a woman, even in a bathing suit. Not to mention that the murder weapon is a stiletto heel! That was just too good.

Nerds Like It Hot is one of the better books of this series - though most of them are excellent. Once again, I highly recommend this series.
POSTED AT 07:30