review: THE NERD WHO LOVED ME by Vicki Lewis Thompson 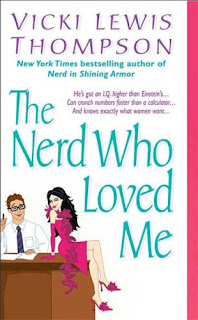 Vicki Lewis Thompson's NERD IN SHINING ARMOR was a blockbuster New York Times and USA Today bestseller. Her next deliciously sexy novel features an irresistible nerd and the woman who discovers she can't get enough of him . . .

Lainie Terrell is no ordinary single mother. With feathers in all the right places, she's one of the hottest showgirls in Vegas. Aside from a hot-tempered ex-boyfriend on her sequined tail, Lainie's biggest problem is finding a decent babysitter for her son. Lainie's dilemma is solved when she ropes Harry Ambrewster, the casino's shy - but very smart and cute - accountant, into the task.

Inheriting his chemist father's high I.Q. and sexy good looks, Harry has always been intrigued by Lainie. He isn't thrilled at the prospect of babysitting, but he'll do anything to get near the gal who fuels his craziest fantasies. Then Lainie's dangerous ex comes knocking . . .

Their option? Run faster than a pair of net stockings . . .

In disguise and on the lam, Lainie's masquerading as the perfect wife. Harry's doubling as the he-man protector. But with a set-up this hot, who's fooling who? When the lights go down, and the masks come off, a nerd like Harry could be just the right ignition to set a woman like Lainie on fire . . .

This is one of my favorites of the Nerd series, definitely in the Top 3. The main characters are Laine - a Vegas showgirl on the run from Joey, her abusive ex-boyfriend and the father of her little boy - and Harry - an accountant who has been infatuated with Lainie since she started working at the same casino. Lainie's ex is a scary guy with a drinking problem and the monetary means to work around any legal issues in regaining custody of little Dexter. When Joey shows up in Vegas and breaks down Lainie's apartment door while Harry is babysitting Dexter, Lainie and Harry end up on the lam in a resort town in Arizona while Harry's mother gets the grandmother experience with Dexter. Lainie and Harry are a great couple, and it was so fun to see how they worked around the obstacles in their path - especially Dudley. Thompson has quite a knack for creating memorable secondary characters. Come back tomorrow for a review of book 3, Nerd Gone Wild!
POSTED AT 07:30