SO SHELLY
by Ty Roth

High school junior John Keats has only tiptoes near the edge of the vortex that is Gordon Byron, schoolmate and literary prodigy. That is, until their mutual friend, Michelle "Shelly" Shelley, drowns in a sailing "accident."

After stealing Shelly's ashes from her memorial at Trinity High, Keats and Gordon set on a course for the small Lake Erie island where her body washed ashore, and where she wanted to be laid to rest. Granting her last wish would be Keats and Gordon's way of letting their friend have one final "so Shelly" romantic journey. As they make their way to Lake Erie, navigating obstacles and resisting temptations, Keats and Gordon flue together the shattered pieces of Shelly's and their own pasts while attempting to make sense of her premature death. 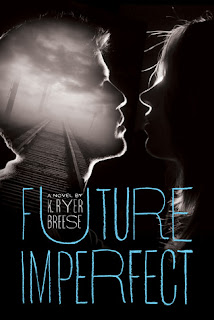 Ade Patience can see the future. Pretty cool, right? But there's one small problem. During his latest vision, he sees himself murdering a classmate from his high school.

When 17-year-old Ade Patience knocks himself unconscious, he can see the future. However, he's also addicted to the high he gets when he breaks the laws of physics. And while he's seen things he's wanted to change, Ade knows The Rule: You can't change the future, no matter how hard you try.

His emmory is failing, his grades are in a death spiral, and both Ade's best friend and his shrink are begging him to stop before he kills himself. Luckily, the stunning Vauxhall Rodolgo recently transferred to his school and, just like Ade saw in a vision two years previously, they're destined to fall in love. It's just the motivation Ade needs to kick his habit. Only . . . things are a bit more complicated than that. Vauxhall has a powerful addiction of her own. And after a vision in which Ade sees himself murdering someone, he realizes that he must break the one rule he's been told he can't.

Ade and Vauxhall must overcome their addictions and embrace their love for each other in order to do the impossible: change the future.

Future Imperfect melds the excitement of a classic Marvel Comics hero with the modern romance of Twilight, and the result is a genre-bending Young Adult tour-de-force.

Courtesy of Scholastic (via First Reads)

The day the blizzard started, no one knew that it was going to keep snowing for a week. That for those in its path, it would become not just a matter of keeping warm, but of staying alive . . .

Scotty and his friends Pete and Jason are among the last seven kids at their high school waiting to get picked up that day, and they soon realize that no one is coming for them. Still, it doesn't seem so bad to spend the night at school, especially when distractingly hot Krista and Julie are sleeping just down the hall. But then the power goes out, then the heat. The pipes freeze, and the roof shudders. As the days add up, the snow piles higher, and the empty halls grow colder and darker, the mounting pressure forces a devastating decision....

I bought the first two books in Jessica Verday's Hollow trilogy, as well as a few other books that looked interesting:

I finally got around to grabbing a copy of Cate Tiernan's Balefire bind-up - the cover is just too beautiful to pass up! I have the original books but haven't read them yet, so I may do a comparison between the two versions to see if anything has been changed.

Lastly, I was finally able to track down a copy of the last Animorphs book needed to complete my collection!!! Yay for finding #50: The Ultimate! Now that I've got all of them, I might start doing a weekly(ish) Animorphs review. Although with grad school ramping up, that will probably be moved to the back burner for a while.