review: I AM NUMBER FOUR by Pittacus Lore 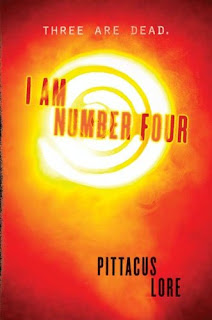 Nine of us came here. We look like you. We talk like you. We live among you. But we are not you. We can do things you dream of doing. We have powers you dream of having. We are stronger and faster than anything you have ever seen. We are the superheroes you worship in movies and comic books - but we are real.

Our plan was to grow, and train, and become strong, and become one, and fight them. But they found us and started hunting us first. Now all of us are running. Spending our lives in shadows, in places where no one wuold look, blending in. We have lived among you without you knowing.

They caught Number One in Malaysia.
Number Two in England.
And Number Three in Kenya.
They killed them all.

I am Number Four.

I was torn about reading this one, as I discovered earlier this month on DJ's Life in Fiction how the book came about. I have no desire to support anyone the likes of James Frey! However, I also agreed with DJ's assessment that a good book is a good book, and, seeing as how I'd already bought it and was planning on seeing the movie this weekend before hearing about the controversy, I figured I might as well give it a fair shot.

First off, the book design is beautiful. The art department did a fantastic job with the colors, symbols, and embossing on the jacket and the book itself, as well as the Lorien Legacies name printed on the edges of the pages. The design was what drew me to the book - I bought it before hearing about any of the hype. (I know, I must have been living under a rock!)

As for the story itself, I wasn't as impressed with it as I was with the design. While it's an interesting concept, I just couldn't connect with John - even more unusual considering that the story is told in first person, and that's usually much easier for me to like. I had a hard time believing that someone who had been on the run for his entire life would not see the inherent problem with his behavior upon entering his new school in Paradise, Ohio. I also couldn't believe how long it took for some action to take place! It wasn't until about 225 pages in that there was some decent action (read: not high school bullying), and even then it was only a relatively short scene. The real action didn't start until about page 340. Had I not been so focused on finishing the book before seeing the movie later tonight, it probably would have gone in my to-finish-when-there's-nothing-better-to-read pile.

That said, I'm still going to see the movie. I'm curious to see what the big deal is Alex Pettyfer and whether he would be a good fit for some of the other movies rumored to be considering him. Will post a review of the movie either tonight or tomorrow!
POSTED AT 14:00