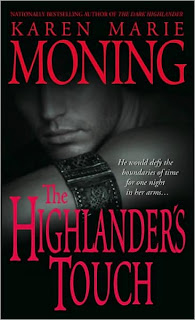 A WARRIOR OF IMMORTAL POWERS

He was a mighty Scottish warrior who loved in a world bound by ancient laws and timeless magic. But no immortal powers could prepare the laird of Castle Brodie for the lovely accursed lass who stood before him. A terrible trick of fate had sent her 700 years back in time and into his private chamber to tempt him with her beauty - and seduce him with a desire he could never fulfill. For this woman he burned to possess was also the woman he had foresworn to destroy.

A WOMAN CAUGHT IN THE MISTS OF TIME

When Lisa felt the earth move under her feet, the fiercely independent 21st-century woman never dreamed she was falling . . . into another century. But the powerful, naked warrior who stood glaring down at her was only too real . . . and too dangerously arousing. Irresistibly handsome he might be, but Lisa had no intention of remaining in this savage land torn by treachery and war. How could she know that her seductive captor had other plans for her . . . plans that would save her from a tragic fate? Or that this man who had long ago forsaken love would defy time itself to claim her for his own . . .

Circenn Brodie has been charged with guarding a certain magical object important to the Fae. As such, he has cursed the object so that if it is touched, the item will be magically returned to him. What he doesn't count on is it being lost for 700 years . . . and that its finder is returned to him from 700 years in the future along with the object!

Lisa Stone's life has been tough, and it looks like it will only get tougher down the road. She consoles herself by touching the objects in the museum where she works as a night janitor. One night, she touches the museum's newest acquisition and finds herself hurled through time and space into medieval Scotland.

Circenn finds himself between a rock and a hard place, because Lisa is clearly a guileless woman, but he has sworn to kill the person who returns his magical object. Not only can he not bring himself to kill a woman, but he also finds himself increasingly drawn to her.

The ending was romantic and mostly predictable, yes, but that doesn't detract from the story in this case. You need to expect a certain amount of formulaity (is that a word) in this genre, and in my experience this is even more flagrant in historicals. That said, I thought this was a cute story. Moning's Highlander series is great in that the characters are different enough to maintain your interest in the series but don't vary so much that it's jarring to skip from one book to the next.
POSTED AT 07:00