review: BLONDE WITH A WAND by Vicki Lewis Thompson 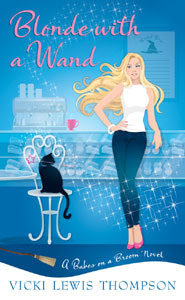 From the wild and hexy imagination of Vicki Lewis Thompson comes an engaging new series of bewitching temptation, mortal consequences, and a witch who shouldn’t be toyed with . . .

Never cross a witch in love.

Sexy witch Anica Revere has one absolutely unwavering rule: Never, under any circumstances, get involved with a man before telling him she’s a witch. Still, what’s one silly rule? Especially when the guy in question is as cute as Jasper Danes. But when Anica and Jasper have a spat, she breaks an even bigger rule of witchcraft and turns him into a cat. Bad news for him. Worse for her.

With Anica stripped of her powers for the witchy infraction, it’s p to Jasper to undo the hex, but he never expects the hardest part of the bargain to be resisting Anica. The stakes are high, and the chemistry is off the charts. But what’ll happen if Anica and Jasper both fall under the strongest spell of all: love?

Anica Revere is three weeks into a great relationship with Jasper Danes, and it's clear he wants to move things to the next level. But there's one problem - he doesn't yet know she's a witch. When they are out to dinner and she runs into his ex-girlfriend, though, Anica loses her temper and blasts him with a transformation spell. The cat is finally out of the bag - literally! Jasper is now a cat, and Anica has no idea how to change him back, especially now that she has lost her magic. As they slowly begin to figure things out, the next question is whether or not Jasper will be able to look past her magic to love her for the woman she is.

What a cute book! I was worried that I would be burned out on Thompson's paranormal books after the Hex series, but I actually ended up liking this book even better than Over Hexed. Anica and Jasper were really cute together, and it was fun to see Dorcas and Ambrose make a repeat appearance in this series. Thompson's new series is a fantastic light paranormal romance read.
POSTED AT 07:00