review: BEYOND THE HIGHLAND MIST by Karen Marie Moning 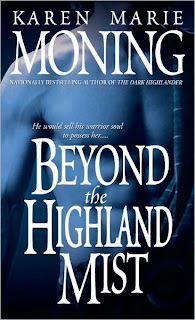 He was known throughout the kingdom as Hawk, legendary predator of the battlefield and the boudoir. No woman could refuse his touch, but no woman ever stirred his heart - until a vengefl fairy tumbled Adrienne de Simone out of modern-day Seattle and into medieval Scotland. Captive in a century not her own, entirely too bold, too outspoken, she was an irresistible challenge to the sixteenth-century rogue. Coerced into a marriage with Hawk, Adrienne vowed to keep him at arm's length - but his sweet seduction played havoc with her resolve.

A PRISONER IN TIME

She had a perfect "no" on her perfect lips for the notorious laird, but Hawk swore she would whisper his name with desire, begging for the passion he longed to ignite within her. Not even the bariers of time and space would keep him from winning her love. Despite her uncertainty about following the promptings of her own passionate heart, Adrienne's reservations were no match for Hawk's determination to keep her by his side . . .

Beyond the Highland Mist was my first foray into Moning's paranormal romance books. It's also the first historical romance I've read in a long time - that used to be my favorite genre, but it fell to the wayside when I discovered paranormals back in '06. What a fun reintroduction to the genre!

Adrienne is a likeable heroine, and, unlike many female protags in timetravel romance, she actually comes to terms with the reality of her situation fairly quickly. And Hawk, though definitely the picture of an overbearing Highland laird, is actually soft at heart and just a touch insecure about himself. I really loved the fae aspect and how eager Adam was to mess with Hawk and Adrienne's lives. While it was frustrating to watch the couple and their relationship suffer, it was worthwhile in the end to witness how they came together and were able to overcome the obstacles facing them. (That's not cliche at all, right? ha!) It's hard to find a historical romance that isn't formulaic, but, though she follows the general outline, Moning continually finds ways to make it her own. If you haven't read this already, go grab a copy now! Check back tomorrow for my review of the second book in the series, To Tame a Highland Warrior.
POSTED AT 07:00