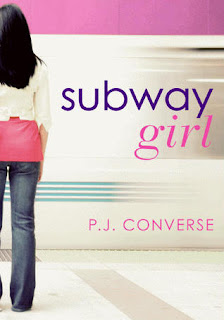 When Simon sees Amy on a Hong Kong subway, he wants to talk to her. But when he finally works up the courage, he finds out he can't. Because Amy doesn't speak Chinese, and Simon is failing English.

Somehow, Amy and Simon connect, and they discover that they understand each other. Enough for Simon to admit he is dropping out of school. Enough for Amy to confess that she is pregnant with her ex-boyfriend's baby. Lost in a world so much bigger than they are, Amy and Simon realize they can rescue each other when no one else can.

Subway Girl had great potential, and it's a quick and easy read, but the language made it very difficult to maintain interest. The language issue wasn't just because Simon and Amy couldn't understand each other, but rather from Amy's tendency to ramble, all the while knowing that Simon wouldn't be able to understand her. Sometimes it was also difficult to figure out who was speaking in a group situation, as Converse doesn't always identify speakers. Simon was a great character, but Amy just fell flat for me. She was raised in America and therefore had American attitudes and beliefs, yet kowtowed to her family, friends, schoolmates, etc. Converse tackles some important issues in Subway Girl, including pushy boyfriends, teen pregnancy, cultural differences, and the incredibly intense Chinese education system, using his two years of experience teaching English in Hong Kong as inspiration. For that reason, it's a worthwhile read. Especially important is the message that just because someone looks a certain way, it doesn't mean that they will conform to your beliefs about them. (Amy is Chinese by blood, but was raised in America and speaks very little Chinese.) However, this is not a masterpiece of writing, and that fact is reflected in my rating.
POSTED AT 07:00