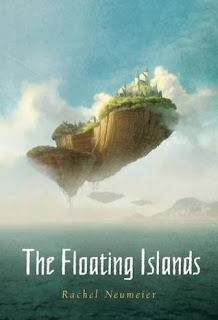 The Floating Islands are unlike anything Trei has ever seen: stunning, majestic, and graced with kajuraihi, men who soar the skies with wings. Trei is instantly sky-mad, and desperate to be a kajurai himself. The only one who fully understands his passion is Araenè, his newfound cousin. Prickly, sarcastic, and gifted, Araenè has a secret of her own . . . a dream a girl can never attain.

Trei and Araenè quickly become conspirators as they pursue their individual paths. But neither suspects that their lives will be deeply entwined – and that the fate of the Floating Islands will lie in their hands . . .

Trei arrives at the Floating Islands penniless, still riding the waves of grief from his family's demise. He expects to be turned away yet again, as his father's brother had done, but instead finds solace in his mother's brother's home. Though the grief never truly leaves him, Trei adapts to his new life and even finds joy in his new goal of auditioning for the kajuraihi. There is nothing he wants more than to join the ranks of the winged men, protectors of the islands.

Araenè is not happy with this disruption to her normal life, especially since Trei is bunking in her room while the attic is being made over for him. But she learns to tolerate him, and even befriends him once she discovers that his presence means that she can have more freedom than ever. Island society is far from progressive when it comes to women's rights, and she is used to sneaking out of the house dressed as a boy when she wants her freedom. When tragedy strikes, though, Araenè is forced to make a choice between following her prescribed path in life or taking a chance on her dreams.

What Trei and Araenè don't realize is that the individual paths they are following will eventually intertwine - and that they hold the key to the Islands' future in their hands.

I was definitely not expecting to enjoy this book as much as I did! Had it been just Trei's story or just Araenè's story, it would not have been so enjoyable. But the two of them fit together perfectly, and it's impossible to not keep reading. Neumeier has built a fantastically detailed universe - complete with a map in the front of the book - and deftly weaves in history lessons for both the Islands and Tolounn, along with a real sense of social and military protocol. All in all, this book is a lot of fun, and I hope there will be a sequel.
POSTED AT 07:00