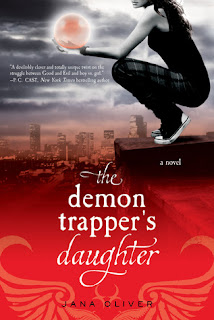 Rebellious teen Demon Trapper Riley Blackthorne just needs a chance to prove herself – and that’s exactly what Lucifer is counting on.

It’s the year 2018, and with human society seriously disrupted by the economic upheavals of the previous decade, Lucifer has increased the number of demons in all major cities. Fortunately, humans are protected by trappers, who work to keep homes and streets safe from the things that go bump in the night.

Riley has always dreamed of following in her father’s demon-trapper footsteps. But when tragedy strikes and a top-level demon murders her dad, Riley finds herself in for a much more dangerous future than she ever could have imagined.

It has been very difficult trying to pin down how I feel about The Demon Trapper's Daughter. One one hand, the storyline is highly original and fast-paced, with a strong [but not overly independent] heroine. These are all characteristics of my favorite books. On the other hand, it seems like the author rushed through explaining the series mythology and ended up leaving a lot of things unexplained. For example, we get a decent history of how the city devolved into its current state or disrepair and poverty. However, there is no reason given for why demons are so prevalent in the city, or even if their existence has been an accepted part of society for a long time or only sprang up recently. These are details that the reader is expected to simply accept on blind faith.

Riley is an easy character to like, and I nearly cried along with her when life as she knew it ended with her father's death. There are a couple of reviews out there that decry Riley as a "typical female character," but that makes me wonder if they even bothered to read the book. Riley is clearly a badass. She's just not invincible. She's a newbie trapper drowning in grief, so of course she's going to make mistakes. There is nothing wrong with accepting help, especially when not doing so could get you killed.

With very few exceptions, all of the other main and secondary characters are men. Part of this is because demon trapping is a male-dominated profession, but it also says something about Riley's character and how uncomfortable she is around women, especially those outside of the demon trapping community. The three main male characters are Beck, Simon, and Peter - Beck and Simon are both demon trappers, and Peter is Riley's best friend from school. All three of them seem to have feelings for Riley, and the love square (rectangle? trapazoid? parallelogram?) was a little frustrating. Of course, these things are always frustrating when they're not going the way we want them to go... The reader only gets Riley and Beck's points of view, so maybe that is why I am more sympathetic to him than Simon.

With the way this book ended, it will be very interesting to see where Oliver takes this series. She has left herself a lot of room to expand the series mythology, and I hope she takes the opportunity to delve even deeper into the mystery in book two.

To clear up any confusion over the title, Demon Trappers: Forsaken is the title of the UK version and was released on January 7th. There is also apparently a prequel, called Retro Demonology, about Riley's first demon trapping experience. Here is a link to the details on Goodreads.
POSTED AT 07:30