Thank you to everyone who entered my giveaway!
And the winner is...

Congrats, Ivy! I will be sending out your book as soon as I confirm your address. 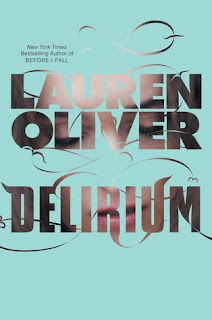 Love. It kills you both when you have it and when you don't.

Before scientists found the cure, people thought love was a good thing. They didn't understand that once love - the deliria - blooms in your blood, there is no escaping its hold.

Things are different now. Scientists are able to eradicate love, and the government demands that all citizens receive the cure upon turning eighteen. Lena Haloway has always looked forward to the day when she'll be cured. A life without love is a life without pain: safe, measured, and happy.

But with ninety-five days left until her treatment, Lena does the unthinkable: she falls in love.

Lauren Oliver, author of the incandestent New York Times bestseller Before I Fall, shows us a world as terrifying as The Hunger Games and a romance as true as Romeo and Juliet.

This book has generated so much buzz that I was a little afraid it wouldn't live up to expectations. Thankfully, my fears were allayed within the first few chapters, and I soon found myself submerged in a dystopian Portland society, waiting for Lena to contract amor deliria nervosa - that is, to fall in love. To get an idea of Delirium's tone, imagine a dystopian Romeo & Juliet . . . except where their death at the end of the story was tragic, it would be merciful compared to their fate in Delirium should their love be discovered.

Delirium is told in first person through Lena's eyes, so be prepared to be thrown headfirst into a maelstrom of teenage emotions and new love, all heightened by the fact that everything is taboo and therefore somehow better, stronger even, than it would be otherwise. The plot moves slowly (though is never boring) until about two-thirds of the way through the book, mostly because society is so restrictive that nothing splashy could be going on without the patrols taking care of it immediately. But when the pace picks up, it happens so quickly that you almost expect mental whiplash. Delirium ends on one heck of a cliffhanger, and Pandemonium's release date can't come soon enough. If you like YA dystopians, Delirium is the book for you.
POSTED AT 07:00