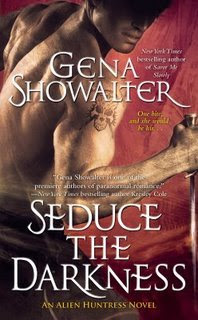 The war between otherworlders and humans changed Earth beyond recognition. It also saved Bride McKellis's life. Before, the gorgeous vampire was a target for every fanatic with a stake and a crucifix. Now, she's free to roam the streets - and desperate to find others of her kind. One man clains to have the answers she seeks. Devyn, King of the Targons, is a warrior and a womanizer, and he makes no secret of how much he wants Bride - and how dangerous he could be to her in every way.

An avid collector of women, Devyn easily seduces human and otherworlder alike. Until now. Not only does Bride resist him, but she leaves Devyn feeling something entirely new . . . a bone-deep need bordering on obsession. Her blood is the key to curing a vicious alien disease, but helping Bride uncover her origins will compel her to choose between electrifying passion and a destiny that could tear her from Devyn's side forever.

Bride McKells is a vampire. Having survived the war between otherworlders and humans, she is pretty confident in her ability to maintain her human façade. So when Devyn, King of the Targons, recognizes her almost instantaneously as a vampire – and she detects on him the scent of her best friend whom she hasn’t been able to track down in years – she has to know more. Devyn is the ultimate womanizer, but Bride is a mystery he can’t seem to solve, and he finds himself more and more drawn to her. Even as Bride and Devyn continue to grow closer, they face the danger of the new alien virus – and Bride’s blood is the only cure.

As much as Devyn is a womanizing jerk, it was so great to watch him realize that there may truly be one woman out there for him – Bride McKells. Devyn and Bride go together perfectly. The only issue I have with this story is that there seemed to be characters with whom the group was already familiar, but I had no idea who they were – until reading the short story, “Tempt Me Eternally,” in Deep Kiss of Winter. The short story was published after Seduce the Darkness, but it comes before this book chronologically. I wish I had read the reader comments on Showalter’s website recommending that the short story be read first. I feel like I would have had a richer reading experience had I done so.
POSTED AT 14:15