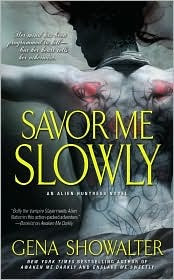 Mishka Le'Ace was created to be an undercover operative . . . literally. Her beautiful body has been mechanically augmented to give her superhuman strength - strength she's going to need. Her latest mission sends her to rescue Alien Investigation and Removal agent Jaxon Tremain from torture and death. With him, she discovers a passion unlike any other. A passion she was forbidden to know . . .

From the moment they meet in a darkened cell, Jaxon craves her touch. But the machine half of Le'Ace forces her to do things she doesn't always want to do. Even betray him . . . and ultimately destroy him. Now Jaxon must battle the man controlling Le'Ace, and even Le'Ace herself, to at last claim the woman he's come to love.

Mishka Le’Ace is a robot operative – or at least the closest thing to it. She never allows her emotions to get in the way of her assignments. Contrary to popular belief, it’s not because she has no heart. She simply has no choice. Her latest assignment, though, won’t allow her to keep her emotions separate. One look from Jaxon Tremain leaves her shaking with need. It’s only a matter of time before Mishka is forced to make a choice between life as she knows it and the love of her life. The question is just how much she is willing to go to sacrifice.

I’ve been looking forward to reading Mishka’s story since first reading about her in Red Handed. There has been a lot of intrigue built up around her character, and it was fun to finally get to the bottom of the mystery – especially after losing some steam in the young adult portion of this series. Mishka and Jaxon are a great couple! This is such a great read.
POSTED AT 07:00