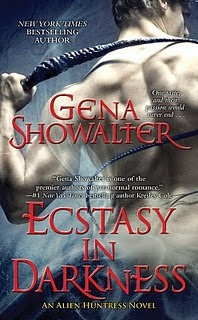 New York Times bestselling sensation Gena Showalter enthralls with a dark, tantalizing world of humans, otherworlders, powers beyond imagining, and a seductive vampire undone by his insatiable hunger for one woman . . .

Growing up poor on New Chicago's meanest streets, Ava Sans had two options: be the predator or be the prey. No contest. Now, working for Alien Investigation and Removal, she's been ordered to capture the biggest, baddest warrior of all - a vampire too beautiful to be real, with the ability to manipulate time. Once the leader of the entire vampire army, McKell has been deemed savage and unstable, spurned even by his own kind.

To McKell, humans should be nothing more than sustenance. Yet the petite, golden-skinned Ava is a fascinating contradiction - vicious yet witty, strong yet vulnerable, lethal but fiercely loyal. Against his better judgement, McKell craves that loyalty, and much more. When the chase leads to seduction, McKell and Ava will race to discover the truth about his past. But the answers will come at a price, even for a woman who thought she had nothing left to lose . . .

Oh, Gena Showalter. I have loved everything of yours that I've read so far, and Ecstasy in Darkness is no exception. Ava radiated spunk, and I loved that about her! She had just the right balance of cockiness and loyalty to perfectly balance McKell, who desperately needed someone as bright as Ava to bring him out of the funk he'd been in since Bride got together with Devyn in Seduce the Darkness. Ava and her friend Noelle were hilarious. It's difficult to pull off that kind of kookiness in an adult novel, but Showalter handled it brilliantly. Their scene in the woods while attempting to snare McKell set the tone for the entire book. All of the characters, both old and new, were so fantastic that this book was literally unputdownable. After reading all of these Alien Huntress books in a row, it's going to be a very long wait until Dark Taste of Rapture (Noelle and Hector's story) comes out in August!
POSTED AT 07:00