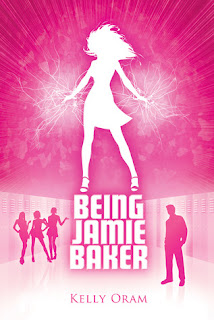 BEING JAMIE BAKER
by Kelly Oram

"Most superhero stories start with a meteor shower or a nasty insect bite, but mine actually starts with a kiss..."

An accident that should end in tragedy instead gives seventeen-year-old Jamie Baker a slew of uncontrollable superhuman abilities.

To keep her secret safe Jamie socially exiles herself, earning the title of Rocklin High’s resident ice queen. But during a supercharged encounter with star quarterback Ryan Miller she literally kisses anonymity goodbye. Now the annoyingly irresistible Ryan will stop at nothing to melt the heart of the ice queen and find out what makes her so special.

Unfortunately, Ryan is not the only person on to her secret. Will Jamie learn to contain her unstable powers before being discovered by the media or turned into a government lab rat?

More importantly, can she throw Ryan Miller off her trail before falling in love with him?

CATE OF THE LOST COLONY
by Lisa M. Klein

The greatest unsolved mystery of American history--what happened to all the colonists who landed on Roanoke Island in 1587? This novel traces the fortunes and misfortunes of one Cate Archer, banished to Virginia by a jealous Queen Elizabeth because of her dalliance with Sir Walter Ralegh. What will be her fate in this dangerous New World?