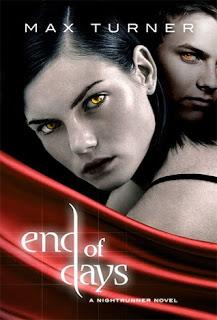 STOP RIGHT HERE if you haven't read the first book in the series and don't wany any spoilers!

Zachariah Thomson has spent the past year getting used to the idea that his best friend, Charlie, and the lovely Luna are now vampires, just like he is. As they learn to cope with the changes this brings, a mysterious creature appears. Likened to the Beast of the Apocalypse, it begins to dismantle the network of support around Zack, who discovers he is more than just an orphaned vampire - he is the subject of an ancient prophect that relates to the End of Days. As friends and enemies, old and new, throw his world into chaos, he is forced to reexamine what it means to be good at a time when it seems that only the strong and ruthless can survive.

My Review
After the harrowing events of Night Runner, Zack is ready for some down time with his best friend, Charlie, and his girlfriend, Luna, both of whom were turned last year. But he should have known better than to wish for that! Soon, Zack and Charlie discover that the vampire underground that helps take care of vampires, supplies human blood, and hunts down those who develop Endpoint Psychosis, is under attack. Nearly all of their vampire allies have been hunted down and killed. The problem is that no one knows who the enemy is. Even after the boys narrowly escape an encounter with the Beast, no one is able to identify it. Out of safe places to hide, Zack and Charlie need to figure out what they're up against before it's too late.

Once again, Max Turner delivers a fresh, easy vampire read. This is such a great series for middle grade and reluctant readers! Cute, clean, and fast-paced, End of Days is everything you need for a great vampire book. The US cover makes it look like Luna, Zack's girlfriend, is the main character of this installment, but she really doesn't play that big of a part. Zack and Charlie are still the main characters in this adventure tale, and boy do those boys know how to get themselves into trouble! I enjoyed End of Days even more than the first book in the series because Zack already knows about his vampirism and now the boys face an even bigger threat. I can't recommend this book more. While girls will still enjoy the story, it's a great book for boys.

Make sure you check out the first book in the series - Night Runner!
POSTED AT 07:00