It's going to be a double-dip review day today - between my friend's wedding and getting sick, I didn't have time to get this review up yesterday. Enjoy! 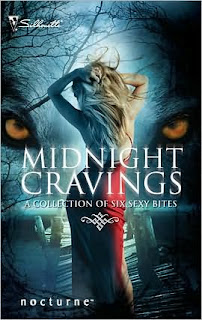 
Under the cover of night exists the dark and sensuous world of Midnight Cravings - a world conjured up in six seductive tales of paranormal passion. Follow some of the genre's best writers, including Michele Hauf, Karen Whiddon and Lori Devoti, on a mesmerizing journey where the extraordinary comes breathtakingly close with every turn of the page.


"Racing the Moon" by Michele Hauf

Sunday, a tow truck driver – and a familiar, is greeted at her latest pick-up by the sight of a studly man with a fantastic rear end. When sparks fly, Sunday has to make a choice between protecting her kitty self or facing her demons with a sexy werewolf.

This story is hot hot hot! I loved it. It would have been nice to have them get together a little sooner, but it's easy to understand why that wasn't feasible. Dean Maverick is one studly werewolf. He'd be more than welcome if he showed up on my doorstep on the full moon! 4 stars.


"Mate of the Wolf" by Karen Whiddon
Allison Berg, a werewolf, is waiting on the latest of a string of blind dates. She finally spies her date and heads on over to introduce herself, and instead trips over a bottle, hits her head, and lands in the hospital. She wants to tell Kane that he may be her mate, but she doesn’t know how to tell a human about werewolves. Kane Webster, a vampire, doesn’t know how to tell Allison that he isn’t really her date, but he feels that she is his destined mate. When the truth comes out, they have to decide if clan rivalries are more important than their burgeoning relationship.


I really enjoyed this story. It's always fun when the story switches between narrators, so you always know what's going on and can have a laugh at the expense of the characters. Apparently this short story is the first time a vampire shows up in Whiddon's werewolf series. She does a great job of maintaining the tension while keeping the humor going. 5 stars.


"Captured" by Lori Devoti
Gray Barsk is a hellhound. When he wakes up in a locked underground cell with a female hellhound named Leve who's raring for a fight, Gray has to figure out how to escape - without hurting Leve and with the rest of the captured hellhounds.


This is a very tense story, and Leve's background is quite sad. I wouldn't recommend it for the faint of heart. Gray is such a sweetheart that you can't help rooting for him the whole time. Their story is quite touching. 5 stars.


"Dreamcatcher" by Anna Leonard
Emma is ill, but nobody knows what is causing her to be so tired. Her family and co-workers all think that she is making a fuss, trying to shirk her responsibilities. When her father goes out of town, he hires a caretaker for her because her brothers can't take the time to "babysit" her. Expecting a female caretaker, Emma is pleasantly surprised when Matthew shows up on her doorstep. But is he actually helping her overcome her illness . . . or causing it?


This was my least favorite of the anthology. It's an interesting premise, but I just couldn't get excited about a woman who barely had the energy to get out of bed. The whole medical / caretaker aspect didn't do anything for me either. I'm sure someone will love this story, but it's not for everyone. 2 stars.


"Mahina's Storm" by Vivi Anna
Mahina Garner is Captain of the Necropolis Police Department. After nearly getting shot on her latest bust, sparks fly between her and Detective Ren Calver.

Another hot hot hot story! Whew! Mahina is one stubborn broad, but she can totally work it. And Ren is one hot tamale. I was rooting for him the entire time he was chasing her; they're so perfect for each other! 4 stars.


"Broken Souls" by Bonnie Vanak
Katia Howard is an outsider in her pack. Sure, they took her in and continue to treat her well, but she knows that she'll never truly fit in until she figures out what happened to her family all those years ago. She uses her candle magic to draw her father to her, but with unintended consequences. Will her relationship with Baylor Devereaux survive under the strain?


This was a very, very interesting concept, but I felt a little lost. I'm pretty sure this is part of a series, and it would have been helpful to have that background before reading it. As it stands, though, Katia is a strong soul with a weak spot for her dad. Had I been in her shoes, I would like to think that I could maintain hope for as long as she did. Baylor was frustrating - very much a "me tarzan you jane" alpha male. It's easy to understand his point of view, but I couldn't quite get over how heartless he seemed at times. He could have at least listened to Katia before making decisions for her. 3 stars.

Overall, this was a great anthology and my first foray into reading Harlequin's Nocturne line. I have a few other Nocturne books, and, if this is any idea of what's to come, I will definitely be digging into them soon.