arc review: THE GHOST AND THE GOTH by Stacey Kade 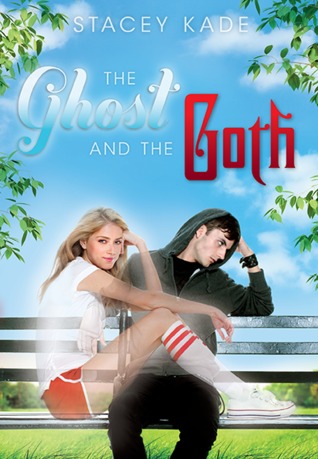 After a close encounter with the front end of a school bus, Alona Dare goes from Homecoming Queen to Queen of the Dead. Now she’s stuck here in spirit form with no sign of the big, bright light coming to take her away. To make matters worse, the only person who might be able to help her is Will Killian, a total loser/outcast type who hates the social elite. He alone can see and hear her, but he wants nothing to do with the former mean girl of Groundsboro High.

Can they get over their mutual distrust—and this weird attraction between them—to work together before Alona vanishes for good and Will is locked up for seeing things that don’t exist?

I was not expecting to like this book. Between the typical high school "mean girl" and the overplayed goth character, I really thought it would be another overplayed young adult book about the mixing of the classes. Boy, was I wrong!

When we first meet Alona, she's sneaking out of gym class to make a phone call. Then she's hit by a bus, and the story really begins. In death, she still carries her teen queen attitude; however, it's nice to have a character actually say it like it is instead of beating around the bush. She figures out fairly quickly that she's dead, unlike a lot of ghostly characters these days that can't seem to figure out what's going on. She's smart, quick, and witty, and she's not afraid to use these gifts to her own advantage.

Will is introduced as your typical goth/slacker, but we quickly learn otherwise. He has a good GPA, and his so-called behavioral problems are generally caused by things out of his control, such as his "gift" - the ability to see and communicate with the dead. With his life spinning out of control, though, it doesn't look like he'll be able to help Alona figure out how to go into the light. How will she ever manage to cross over if the one person she can talk to is locked up in a mental facility as a schizophrenic?

The only thing that kept this from being a five-star read was the language. I don't find it necessary to use "like" in every conversation to try to make it sound more realistic.(e.g. I found nothing but a few bruises and scrapes that went away, like, the next day.) Besides that glitch, the book was well-written and intelligently thought out. It kept me guessing up to the end, which is something that doesn't happen very often these days.
POSTED AT 06:00