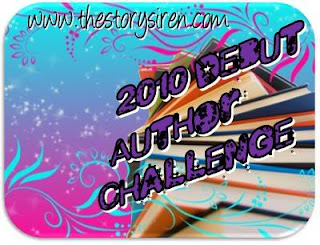 I just found the 2010 Debut Author Challenge at The Story Siren! Participants have been challenged to read at least 12 books, but we can read however many more we want to. Here's my list.

Books I'd like to read this year
Halo by Alexandra Adornetto
Raised by Wolves by Jennifer Lynn Barnes
The Line by Teri Hall
Tyger Tyger by Kersten Hamilton
Shadow Hills by Anastasia Hopcus
Claire de Lune by Christine Johnson
Hunger by Jackie Morse Kessler
Other by Karen Kincy
The Witch's Alphabet by Caitlin Kittredge
Sea by Heidi R. Kling
Bleeding Violet by Dia Reeves
The Candidates by Inara Scott
Paranormalcy by Kiersten White
POSTED AT 00:00

Email ThisBlogThis!Share to TwitterShare to FacebookShare to Pinterest
TAGS: challenges