review: THE DEMON IN ME by Michelle Rowen 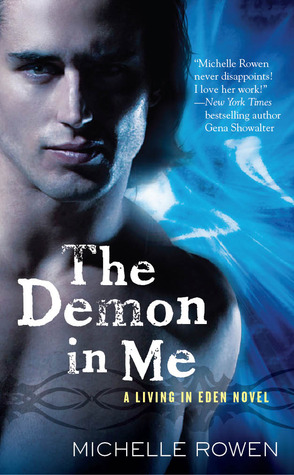 THE DEMON IN ME by Michelle Rowen
Living in Eden #1
Penguin: Berkley
released May 4, 2010
source: bookstore
326 pages

Fate has led Eden Riley to become a “psychic consultant” to the police, even though her abilities are unreliable at best. Those paranormal powers are about to get her into a jam she couldn’t have predicted. After her hunky police detective partner guns down a serial killer in front of her, Eden realizes that she’s quite literally no longer alone. A voice in her head introduces himself as Darrak. He’s a demon. But not in a bad way!

Darrak lost his original body 300 years ago thanks to a witch’s curse. This is the first time he’s ever been able to speak directly to a host, plus there’s a bonus. Eden’s psychic energy helps him to take form during daylight hours. He wants to use this chance to find a way to break his curse — finally. Otherwise, Eden’s going to have to learn to live with this sexy demon…like it or not.
And she thinks she might like it.

After a serial killer is killed right before her eyes, Eden realizes that she is no longer completely alone in her head. She's now possessed by a demon. Because of her psychic abilities, Darrak is able to communicate with her telepathically. He is even able to get his body back during the day - for the first time in three hundred years.

However, Eden has a bigger problem. If she doesn't help Darrak break the curse that destroyed his body, she'll die within the year.

The Demon in Me is fantastically written. I had only read her two young adult novels (Reign or Shine and Reign Check) before cracking open this book, but I think she shines as both a young adult and an adult novelist. Eden's world is filled with psychics, witches, demons, shapeshifters... and one very determined exorcist. Action and witty banter follow Eden's attempts to rid herself of her demonic companion, all the while trying to keep her life together.
POSTED AT 06:00